Battle Of Highbury Part 2, Death of a Soccer fan. 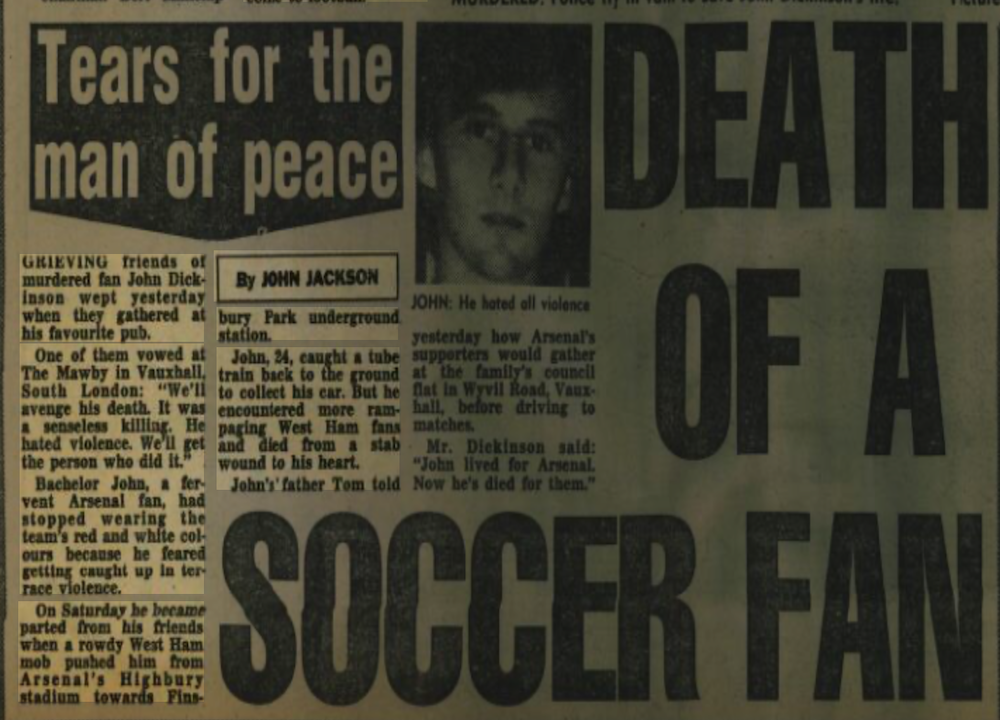 West Ham faces Arsenal on the 1st of May this year at the London Stadium, Forty years to the day of the same fixture played at Highbury, the former home of Arsenal. That day is one of the darkest days of football violence, not just in this fixture but in football at that time.
That morning, one fan went to this game and would never make it back to his family. He wouldn’t grow old, and he wouldn’t have a family of his own. Just for being an Arsenal fan, supporting the wrong club at the wrong time.
The game that day had been marred by violence that delayed the game twice. West Ham fans had attempted to take the North Bank of Highbury, something they had previously achieved in 1975 and 1977. 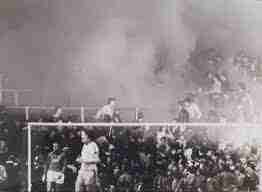 This time though, Arsenal fans were prepared and repelled the West Ham fans. Smoke bombs were set off, and the police struggled to contain the fighters. The game was overshadowed by the violence that day. As I said in part 1, My uncle got us seats in the Arsenal West Stand, but during the second half, with the Hammers two down, he had seen enough to know after the game it wouldn’t be good, so we left with still about 20 minutes of the game to play.
Back in 1982, there was no social media, no mobile phones or text messages. We left the ground to get into his car, then back home.
The next day, once we got the Sunday Express paper, I heard about John Dickenson. His picture lying on the ground with the police trying to save his life stood out. 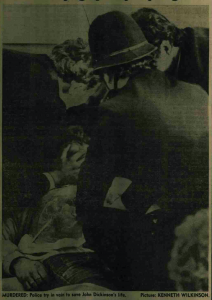 At just 23 years of age, he lost his life on the streets outside the Arsenal stadium, a victim of the growing football violence that dominated football terraces in the early to mid-80s.
It Seems John had ended up at Finsbury Park train station while his car was parked by the ground, so he decided to get the tube back one stop to Arsenal Station, Gillespie road.
He was either as part of an Arsenal firm fighting it out, or he was unlucky to be caught up in it. Whatever he was doing, it would be the last he would see before being stabbed and left in to die in the street.

For the Inter City Firm and their Arsenal equivalent, the Gooners, the match itself didn’t really matter. Both firms had smuggled their members into stands reserved for supporters of the other team and spent much of the match attacking innocent spectators. At the end of the match, the Gooners retreated to the nearby Tube station, preparing to ambush the Inter City Firm (and any other West Ham supporters) as they headed home. But the Inter City Firm had a better grasp of urban mob-warfare tactics and gained the advantage by going to the next Tube station, catching the train back to Arsenal, and attacking the Gooners from the rear. According to some accounts, John Dickinson was the last Gooner left standing his ground as his associates fled in panic. With nothing but a broken broomstick with which to defend the honour of Arsenal against the massed hordes of the East End’s most Neanderthal, he was dead of a knife wound through the heart within seconds.

He was discovered by sports Journalists walking back to get trains after the game.
They called the police over and tried to save his life, to no avail.
I can still remember the following games at Upton Park, posters asking for witnesses. 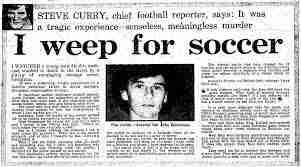 At the end of that season, my uncle decided he had enough, never renewed the season tickets we had held since 1977, and so to my mum’s fears, I moved from the seats of the West Stand to the North Bank of Upton Park.
It would be five years before I went back to Highbury to watch West Ham. By then, football violence started declining, as had attendances at games. In these days of 60,000 attendance in the new London stadiums, it is hard to imagine that, in the mid-80s, attendees were as low as 15,000 as many had decided they just didn’t feel safe. 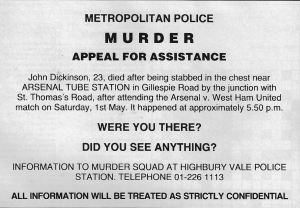 Nostalgia is a wonderful thing. Remembering and reliving the good old days has never been so popular, but while it is generally the good times we look back to, it doesn’t mean we should ignore the dark or tragic times as well.
John Dickinson lost his life 40 years ago today, aged just 23, just for supporting the wrong team at the wrong time.
I hope no other fan’s family ever face what they did that day and the years that followed.